‘Ohmybus’ is not a commercial bus service but a mobile broadcasting studio. The number ’411′ means the date of the general election, April 11th. The bus ran around some parts of Korea during the general election. The Ohmybus broadcast was an internet TV program, adopting the idea of ‘beyond articles’ in OhmyNews. The founder and representative journalist of OhmyNews, Yeon-ho Oh, is the main presenter and a considerable number of candidates for general election from the whole nation were invited as guests for Ohmybus. Not only citizen reporters and OhmyNews full-time journalists, but also guests such as a writer, a professor and a monk made appearances to talk about the Korean election and politics. The phone interview with citizens and specialists had been taken also. Pictures were taken of both the inside and outside of the bus at the same time. The audience could watch this program through their smartphones or the OhmyNews webpage via the Ustream website, which is a platform for live video streaming of events online. The interviews were sent to the editorial office of OhmyNews in real time by full-time journalists on the bus, and citizen reporters also contributed to create some content using social networking services, such as Facebook and Twitter, to improve communications between audiences and broadcasters. 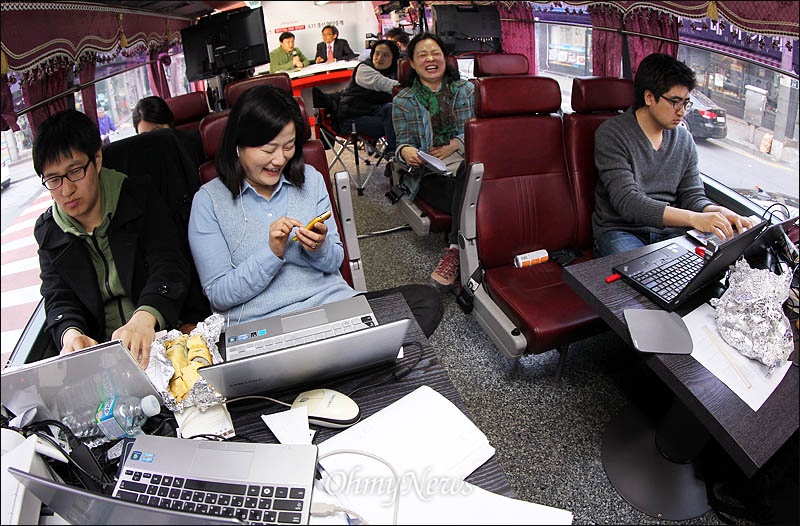 2. [Background] 2012, a significant year in the Republic of Korea

The President of the Republic of Korea is elected nationwide and serves a single five-year term with no additional terms being allowed. The general election for selecting 300 lawmakers is held every four years. In that way, only once every twenty years is the presidential election and the general election during the same year. This year, 2012, is one of those years. This is a remarkable year because the results of the general election will directly link to the presidential election in December.
Amid the increasing polarization of wealth, people’s antagonism toward neoliberal economic values and political conservatism deepened during the last four years. Therefore the opposition alliance has been organized, and they call on voters to “pass judgment” on the Lee Myung-bak administration. Meanwhile, the ruling Saenuri party organized an emergency council headed by Park Geun-hye, who is the conservatives’ front-runner for the presidential race in December. In addition, the journalists from the major broadcasters: KBS, MBC, and YTN have walked out to protest against ‘management censorship’ of their news. Under such circumstances, OhmyNews planned to run a special feature on-air, live on the bus.

3. [Features] The appreciable effects in Ohmybus

(a) Collaboration of old and new concepts

Over a long period, the ‘bus’ has been a common and conventional transportation in South Korea. At the same time, ‘broadcasting’ is very much a traditional way of delivering messages in the media industry. Recently, social media has become the most popular communication tool among Koreans. They have realized that social media is a powerful instrument in building consensus and mobilizing massive crowds within a short period of time. ‘Ohmybus’ has adopted three of the old and new concepts cohesively.
The program was on the air amid a better-than-expected public response. In terms of bus concepts, the audiences wrote positive comments constantly throughout social media. Some comments include, ‘It feels like travelling around the whole nation for myself’, ‘It was a great opportunity to know other candidates besides my MP’, ‘The OhmyNews should visit my area too,’ and so on. The travelling bus made people feel nostalgic for their past memories, and it took an important role as mobile broadcasting equipment. There is enough space for both a live broadcasting studio and a workspace for journalists. 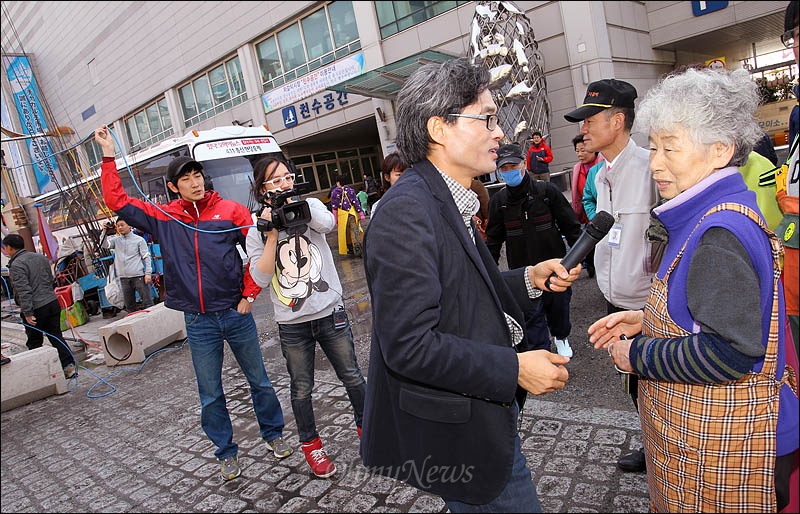 In 2008, OhmyNews also broadcasted live about the candlelight vigils sites where nearly the whole nation rallied against importing U.S. beef. It has implied that internet live could be used to present live broadcasts as well as major television networks. In comparison with 2008, the Ohmybus show brought another new idea such that audiences can enjoy the internet live in HD. Furthermore, there were improvements of solving buffering problem and pop-ups. Above all, viewers can watch the show with smartphones in most any environment.

‘Politainment’, a portmanteau word composed of politics and entertainment, indicates tendencies in politics and mass media to liven up political issues. This term does not seem to have become common in Korea yet. Last November, comedian Choi Hyo-jong was sued by Kang Yong-seok, who is an independent lawmaker, for collectively defaming him on the show. Mostly, politicians are likely to make appearances only to talk about topical issues and their election pledges. Their inflexible political posture can be seen here. However, those who visited ‘Ohmybus’ had slightly different attitudes. The secret behind their attitude difference is ‘the power of music.’ There were three singers invited on the bus, and their music touched candidates as well as audiences.
Korean’s famous ‘socialtainers’–writers, professors, a monk and broadcasters–also joined the program to liven up the mood. The term ‘socialtainer’ is a compound word of ‘social’ and ‘entertainer,’ which indicates people who are in positions of social influences who express their social and political ideas. There are other special guests, such as the candidates from the minority parties, such as the Green Party, Chungple Party and Newjinbo Party. It is supposed to be communicated over a variety of groups in terms of political issues and general elections.

OhmyNews is an online newspaper website with the motto “Every Citizen is a Reporter,” which is based on citizen journalism. It was founded by Yeon-ho Oh in the year 2000. Now he is the prototypical journalist and CEO of OhmyNews. In 2004, the OhmyTV website was launched. About thirty percent of the articles on this website are written by full-time reporters while most of the articles are posted by ordinary citizens. Only the editorial full-time staff takes charge of this edition. OhmyNews had made an impact on the results of the South Korean presidential election in 2002. After being elected, President Roh Moo-hyun granted his first interview to OhmyNews. 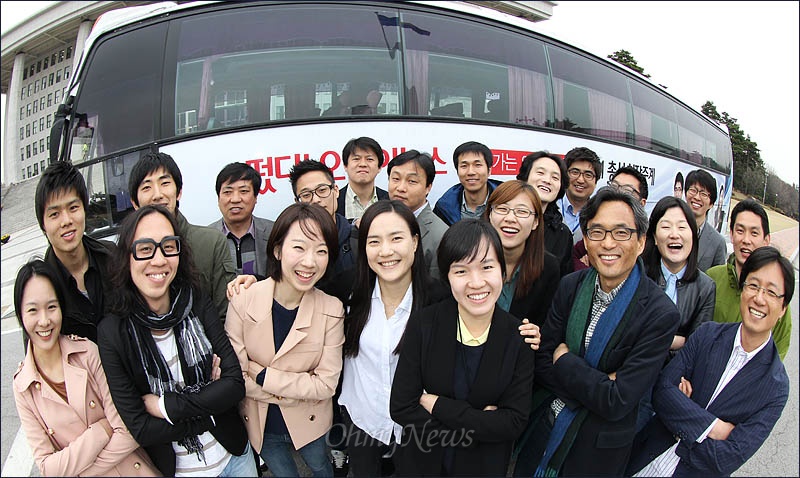