His desirable society: “Living together well”

People might think that the article by Seong-hwan Yun was written by an experienced citizen reporter. Surprisingly a mere second grade history student wrote these profound stories on OhMynews. His remarkable writing ability can be traced to his habit of ceaselessly reading history publications since middle school. He wanted to become a historian, so he studied a wide range of historical subjects, such as ancient history and contemporary history. He wants to be a neo-historian who concentrates not only on history but also contemporary social issues.

This socially critical perspective was inspired by his experience of increasingly desperate circumstance in his family. He moved to Seoul to attend university and lived alone in a tiny rented room which cost 290,000 won ($270 USD) per month.

One day he saw that his electricity was cut off after he went back home to Daegu. He found out that his mother could not afford to pay both his rental fee and the utility bill. Luckily he now has a fixed amount of income from a weekend part-time job in a city library and contributes papers to a historical journal.

Then what sort of society is desirable for him? His answer is ‘living together well’.

” Nowadays, the rich are becoming much wealthier, and the poor are becoming much poorer.  This problem should be solved by both the Korean people and the government. The next government has to reinforce innovational policies which can resolve the polarization and the people should promote a communal sprit through mutual cooperation. ” 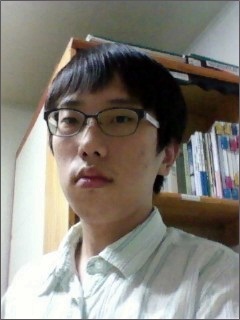 He also thinks a lot about unification between North and south Korea. His grandparents’ hometown on his mother’s side is in North Korea.

“In 2006, I went to the National museum in Dae-gu to see the antiques rented from a North Korean museum. When I left there, I suddenly realized how much I appreciated them again.”

He is young, however, he has considerable insight and perspective towards society and history. That is why his articles are so thoughtful.

by Eunbin Ko
posted in Uncategorized
No Comments »