Even Africans learn from our village

During the Korean War, soldiers who managed to reach Busan harbor were exceedingly fascinated by the beautiful nightscape lined with skyscrapers. However, the next morning they realized that the beams of light they saw were not from the buildings but from shacks on the hill. In those days, it was an area designated to be redeveloped with apartment buildings. 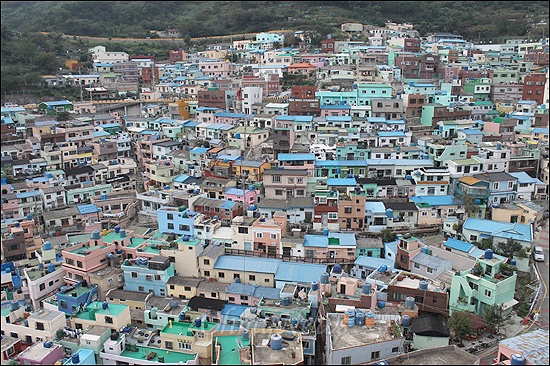 But lately it is thought that establishing village communities, rather than building apartments, is the right answer for urban restoration. Gam-cheon cultural village in Busan is a typical precedent. This village is on an uphill road and it is intertwined with cramped, steep alleys, and houses.

Surprisingly, visitor numbers to Gam-cheon village have been steadily increasing, attracted by the nostalgic scenery. Furthermore, young artists have visited the village and painted murals alongside the walls in the alleys. As a duck takes to water, cafes and galleries have started to appear.

Every year, thirty thousand visitors have been coming to the town, and last July young participants in Unesco international work camps from 10 countries also visited the village. In addition, people from African countries, such as Tanzania and Uganda, called on the village to learn good examples of urban restoration. 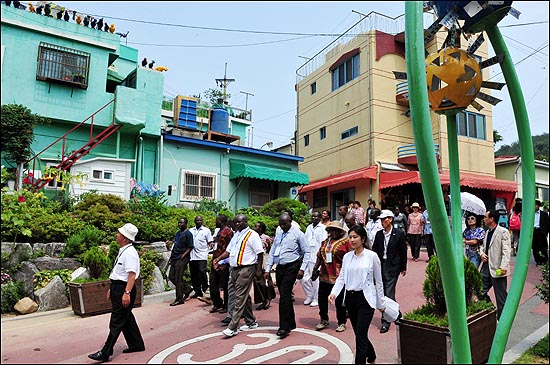 There has been another significant trial in Gam-cheon cultural village, which is publishing a town newspaper composed by the inhabitants of the village. Dong-seo university professor Myeong-hui Lee has contributed to not only publishing the local newspaper, but also to the design of the cultural village.

“The key concept of Gam-cheon cultural village is to develop with preservation, rather than focusing on pure development. Gam-cheon can be a new symbol of urban restoration.“ He says.

For the original article in Korean: http://bit.ly/ShVbQL

by Eunbin Ko
posted in Cool News
No Comments »